Urban and rural trails, each with something very special

1. Going past the Horse and Jockey on Chorlton Green, turn right onto St Clements Road. 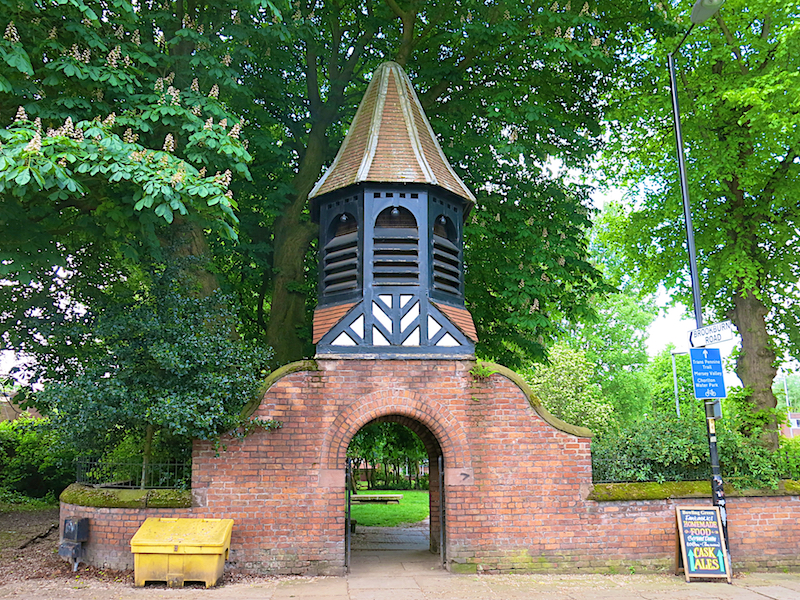 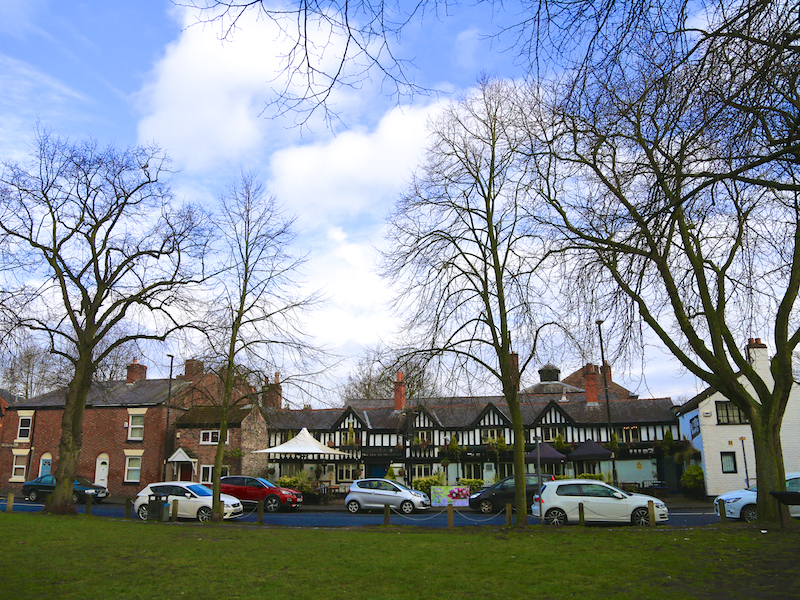 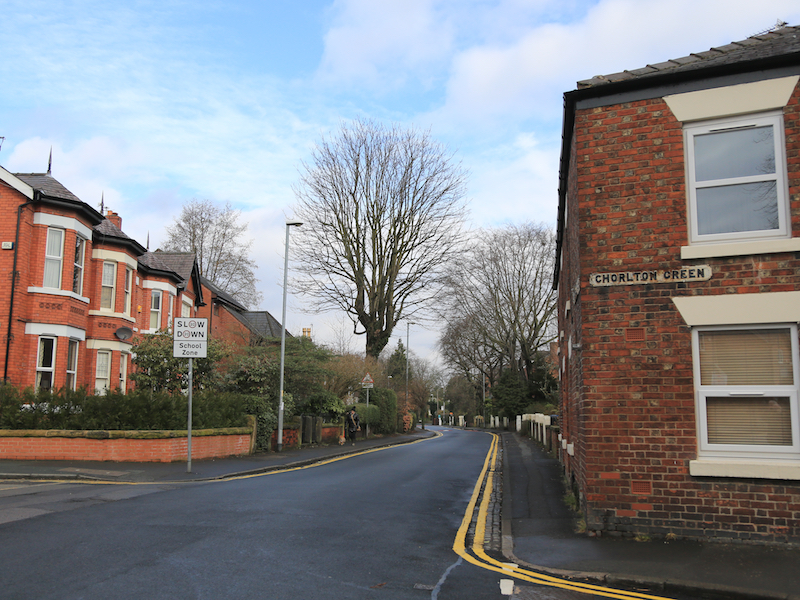 2. Turn left into Edge Lane and follow this until reaching Longford Park on the right.

Longford Park’s current layout dates back to 1857 when Longford Hall and its associated grounds were constructed and laid out by John Rylands, the famous cotton merchant and benefactor of many of Stretford’s civic buildings. The landscape was laid out in the style of Chatsworth House, and Pevsner in 1969 described Longford Hall as ‘the only surviving example of the Italianate style of architecture in the Manchester district’.

John Rylands was a shy and humble man but his business acumen created a company that was considered the ‘monarch of the cotton industry in England’. From modest beginnings, he created a company that was worth 0.19 per cent of GNP by 1888, employing 15,000 people in his 17 mills and factories and producing 35 tons of cloth a day. On his death he was crowned ‘the cotton king’. The fact that his fame subsequently faded somewhat can perhaps be attributed to John Ryland’s strong Christian ideals, which meant that he had lived modestly out of the public eye and much of his philanthropy was kept secret.

John Rylands married Enriqueta Tennant in 1875 and they spent 13 years together before John died at Longford Hall in 1888. John Rylands left an estate of £2,574,922 and Enriqueta followed John’s philanthropic disposition by devoting much of her time and money to good causes. As a tribute to her husband, Enriqueta Rylands founded the John Rylands Library in 1899. Through the purchase of many remarkable private collections, Enriqueta created a library of international distinction.

Enriqueta died in 1908. Longford Estate was sold to Stretford Urban District Council in 1911 for the nominal amount of £14,500 and books from its extensive library joined the collection at John Rylands Library.

After the Longford Hall Estate became a public park, impressive art-deco ornamental gardens and glass houses were made available to the public. Longford Hall became the home of the council’s permanent art collection. It was an art gallery and exhibition space as well as being used for civic occasions and social functions.

In June 1977 Queen Elizabeth II and the Duke of Edinburgh, attended a Royal Garden Party at Longford Park with more than 4,000 guests. 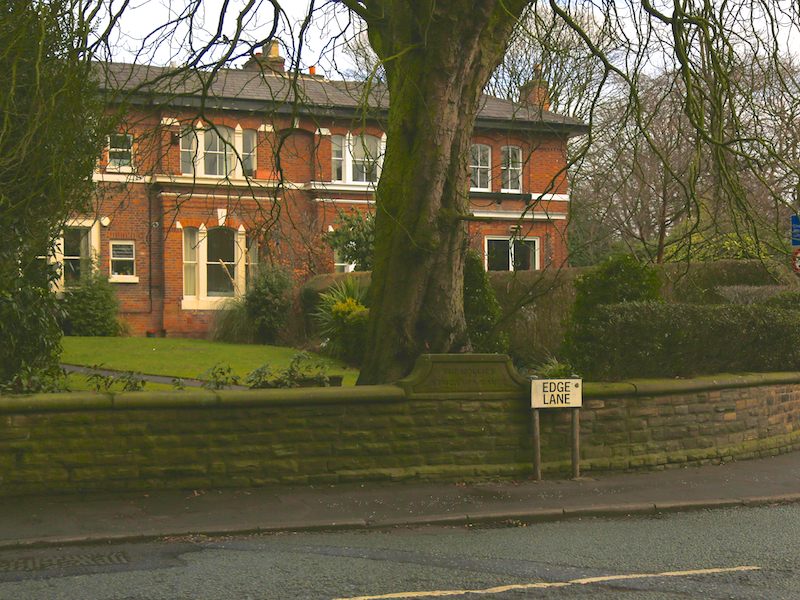 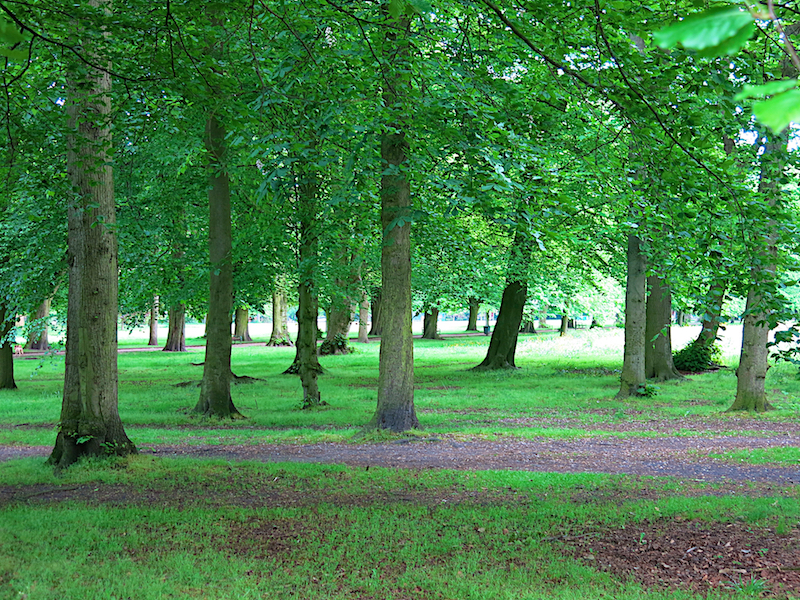 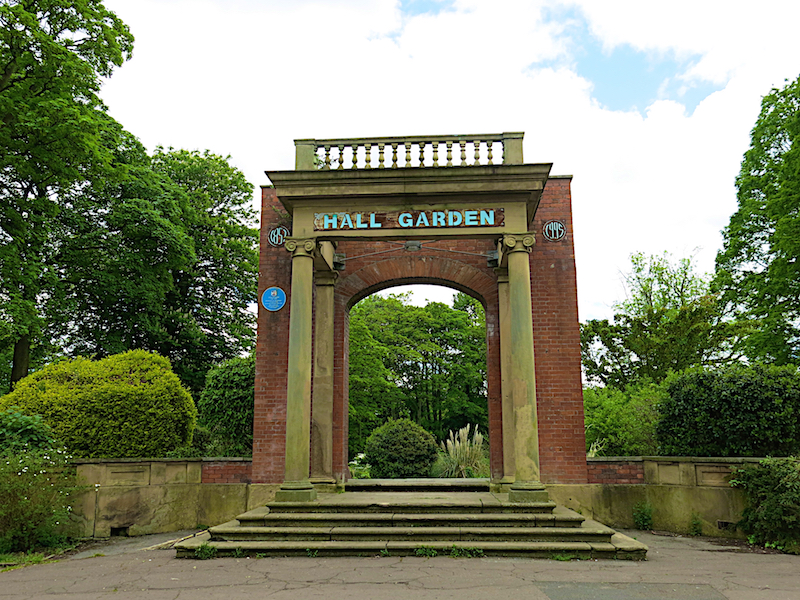 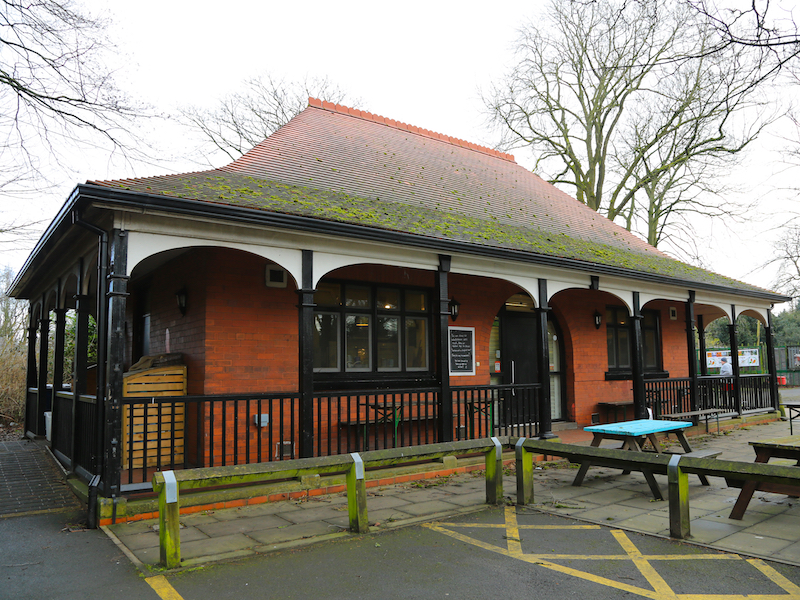 3. Return to Edge Lane, cross it and go along Turn Moss Road, which leads to Turn Moss playing fields.  Continue in a straight line past the car park and across the path. 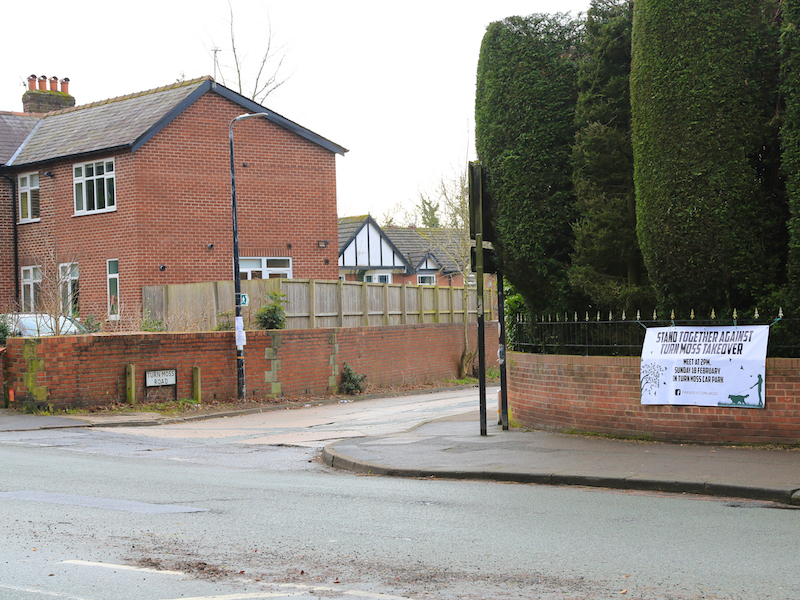 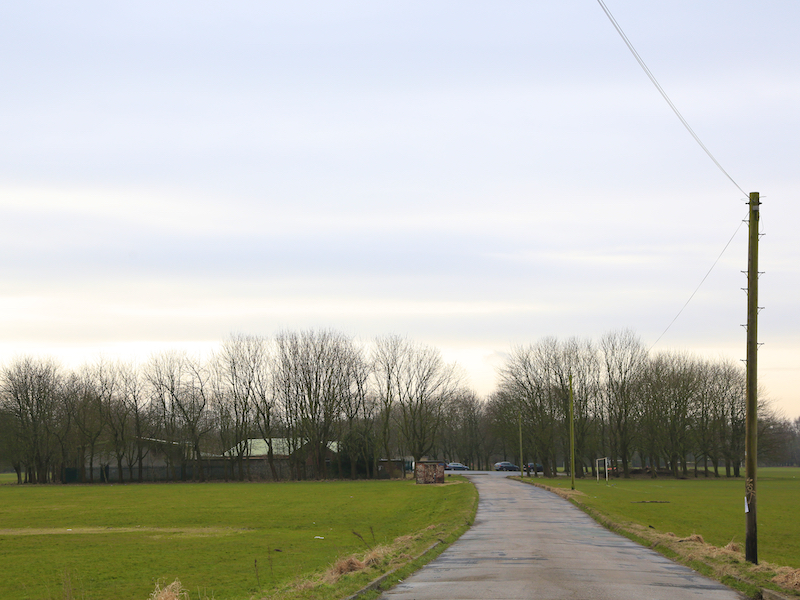 4. Cross Chorlton Brook, then continue straight on until the bank of the River Mersey is reached.

The brook flows through Chorlton Ees,.  Gradually flood control measures were developed to reduce the disruption caused by periodic floods. ‘Ees’:  crops up all along this stretch of river.  Ees means a piece of land liable to flood, or water meadow, and is derived from the Anglo-Saxon meaning ‘island’. 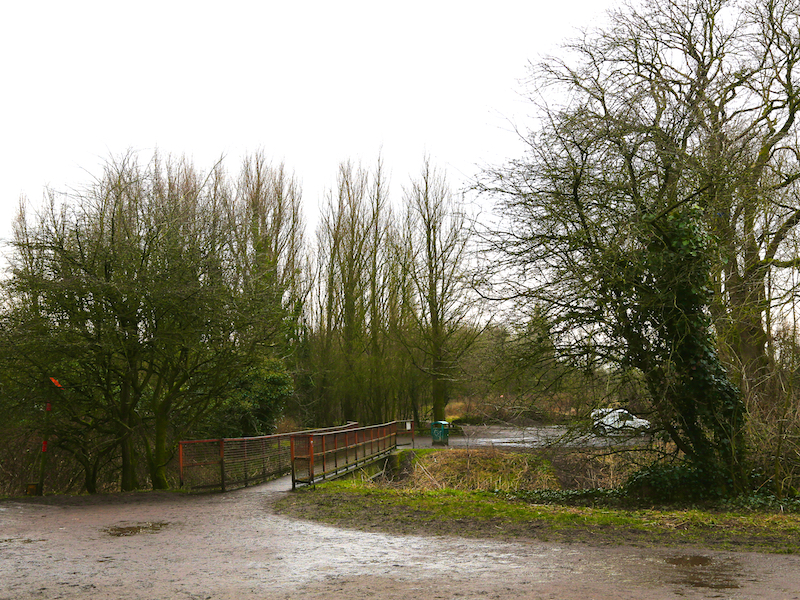 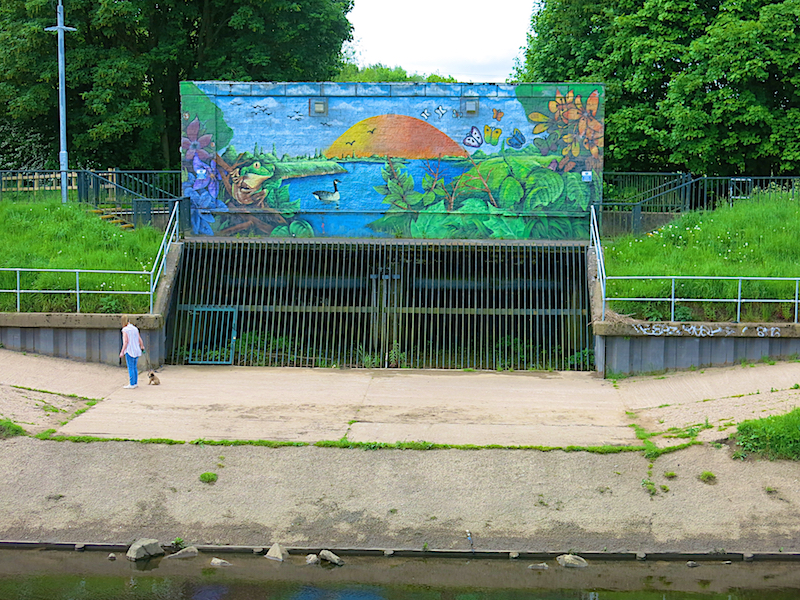 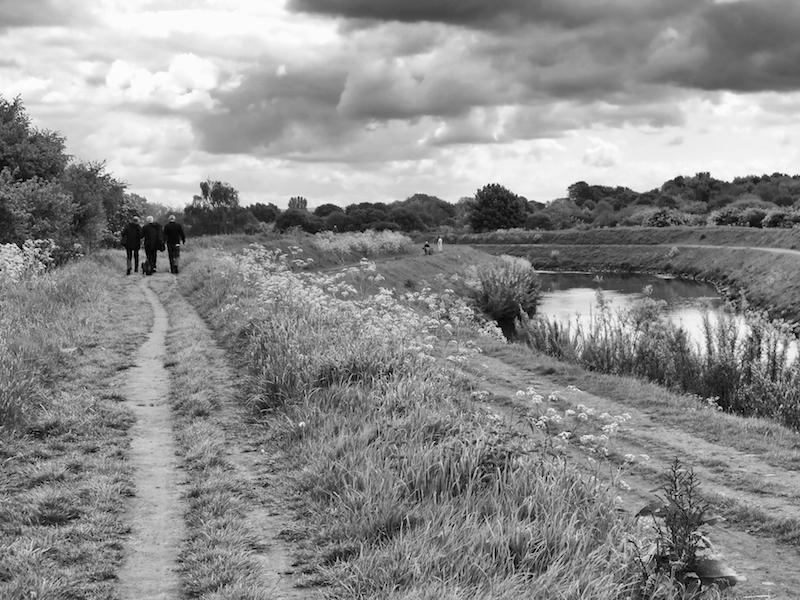 5. Turn left to follow the Mersey upstream until reaching a bridge which crosses to the only pub on the riverbank between Stockport and Sale,  Jackson’s Boat.  Although the route does not cross the bridge, a detour for refreshments is permissible.

There has been a pub here for many centuries, the original name being ‘Jackson’s Ferry Boat’, signifying that for centuries this was where a ferry took people across the river.  The present brick building was constructed at the end of the 18th century, replacing an old wood house that stood on the site.  It was then that a local farmer named Jackson regularly ferried people across the river by boat, charging them a small fee. In 1814 the land came up for sale as ‘Jackson’s of the Boat’.

The ferry was made redundant in 1816 when a wooden footbridge was built over the river and a halfpenny toll charged to cross it on foot, or one penny with a bicycle, and for many years the pub was known as the Bridge Inn. This bridge was washed away in a storm and was rebuilt in 1881 as an iron girder bridge which still stands today. It wasn’t until the 1940s when Manchester Corporation bought the bridge that the toll was finally abolished. 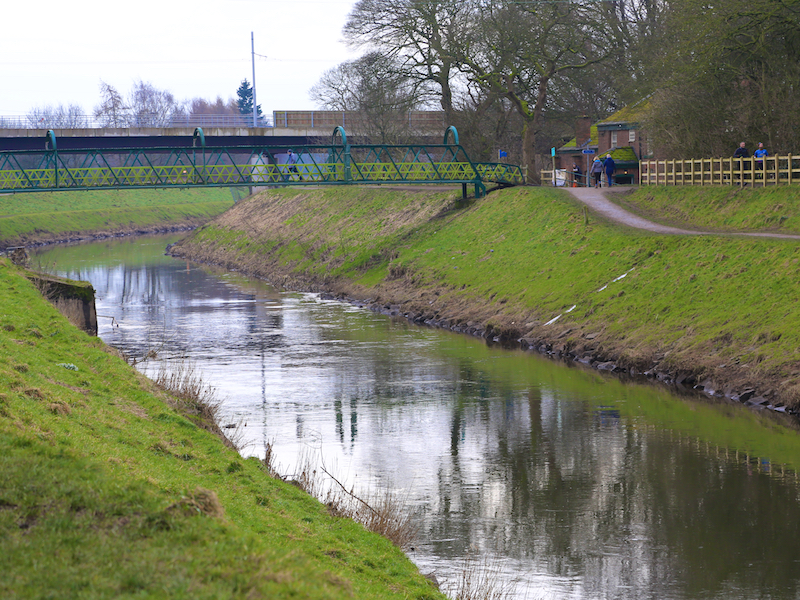 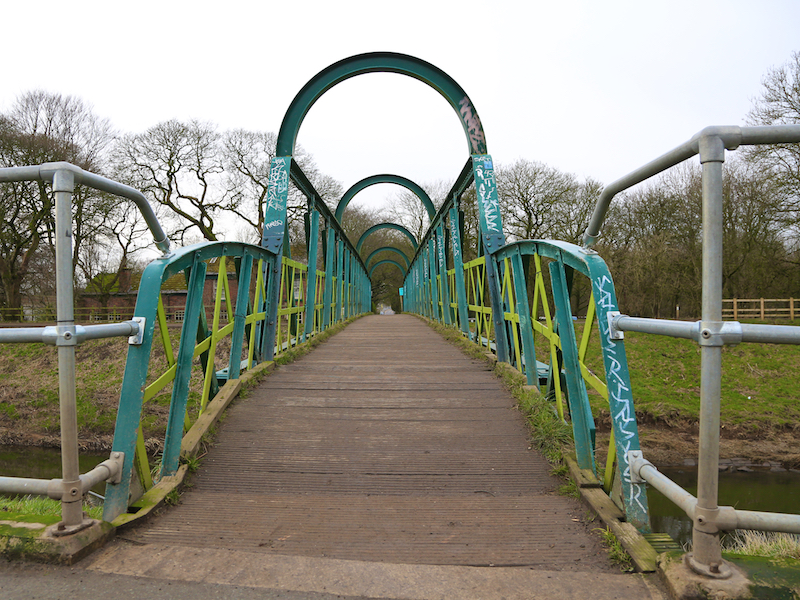 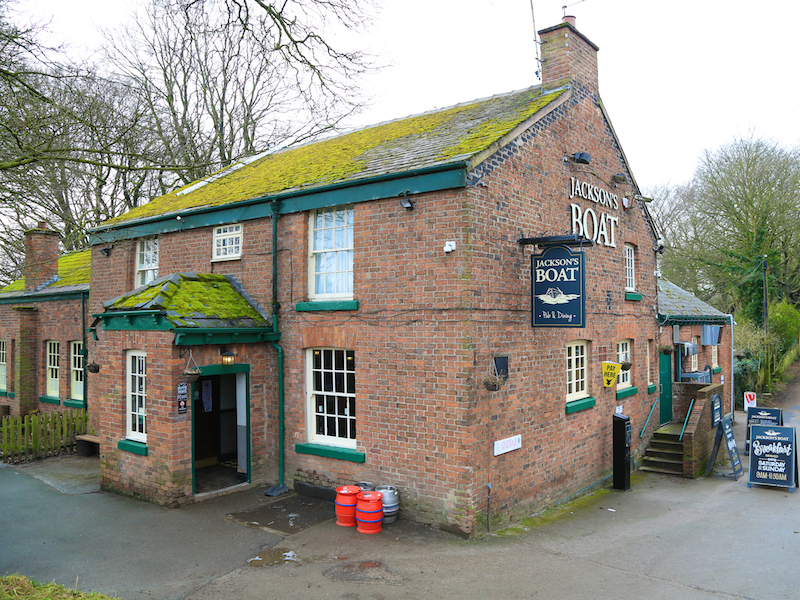 6. Continue along the Mersey until Chorlton Water Park is reached. Go round the water park in either direction – the distance is about the same – until the car park is reached.

In the 1970s, when the first section of what is now the M60 motorway was being constructed, gravel was excavated from the site and used to construct a raised embankment to ensure that the motorway was clear of potential floodwater from the Mersey. The gravel pit was later flooded, creating the lake that is the centrepiece of the water park today.

As the trees have grown and the grasslands developed, the Park has become increasingly valuable for wildlife.  The lake is stocked with fish and has developed into a popular fishery, and in the winter months is a nationally important refuge for wildfowl. 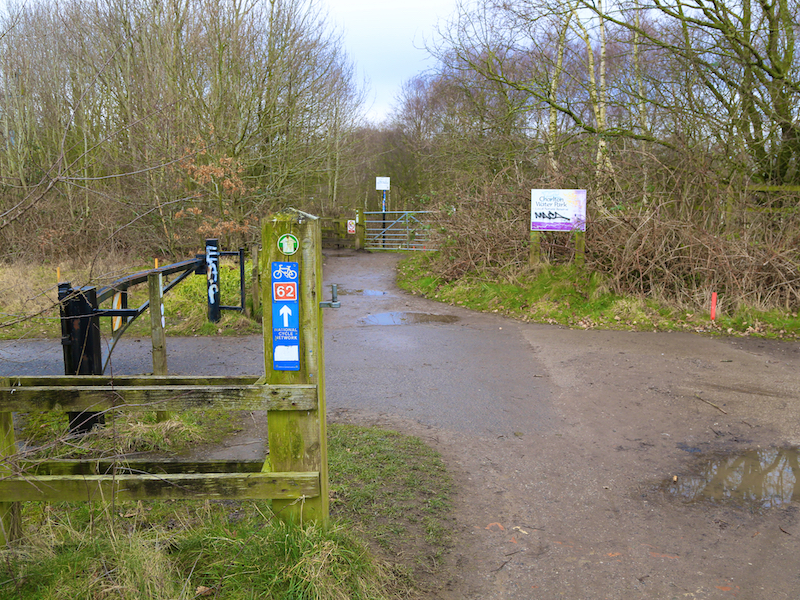 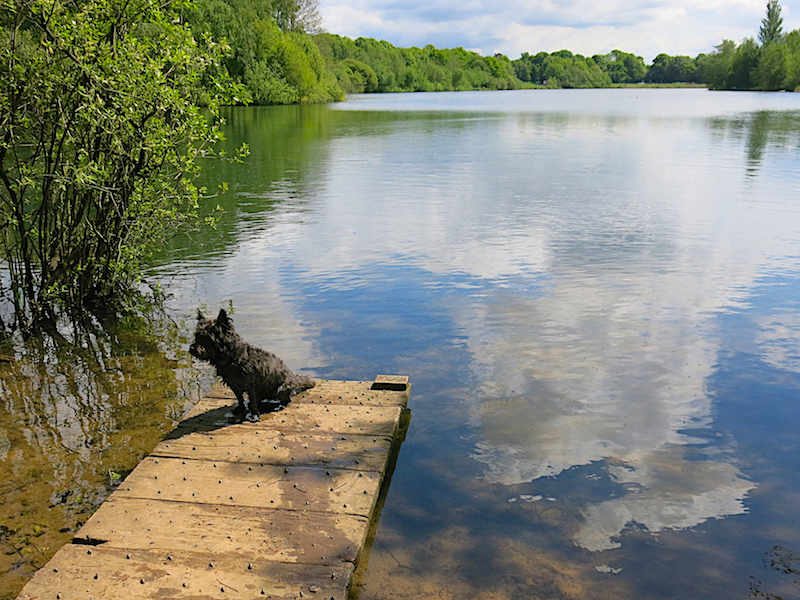 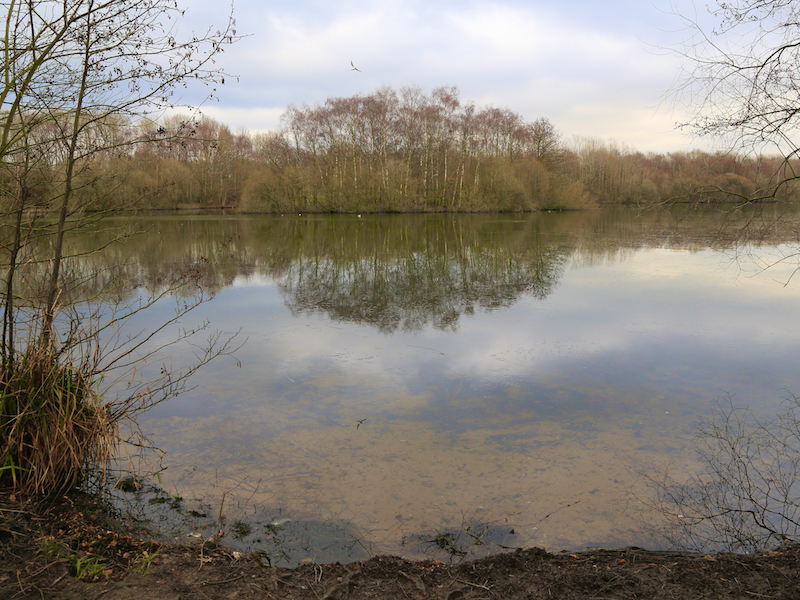 7.  Go through the car park and along Maitland Avenue, then cross Barlow Moor Road to reach Southern Cemetery.

Opened in 1879, Southern Cemetery, Manchester City Council is the largest municipal cemetery in the UK and the second largest in Europe.  Southern Cemetery has six grade 2 listed buildings, four of which are chapels. Immediately adjacent to the northwest corner of the cemetery on Barlow Moor Road is Manchester Crematorium which opened in 1892, the second in the United Kingdom.

The cemetery is the final resting place for many well-known Mancunians.

Manchester’s first multi-millionaire, industrialist and philanthropist John Rylands, is buried in the cemetery. The Rylands memorial is the grandest in the cemetery, although part of the original structure was removed in 1927 and the bronze railings were stolen in 1967: his widow Enriqueta‘s ashes lie in the vault below.

There are warning signs of fines of up to £1,000 for walking dogs in the cemetery. 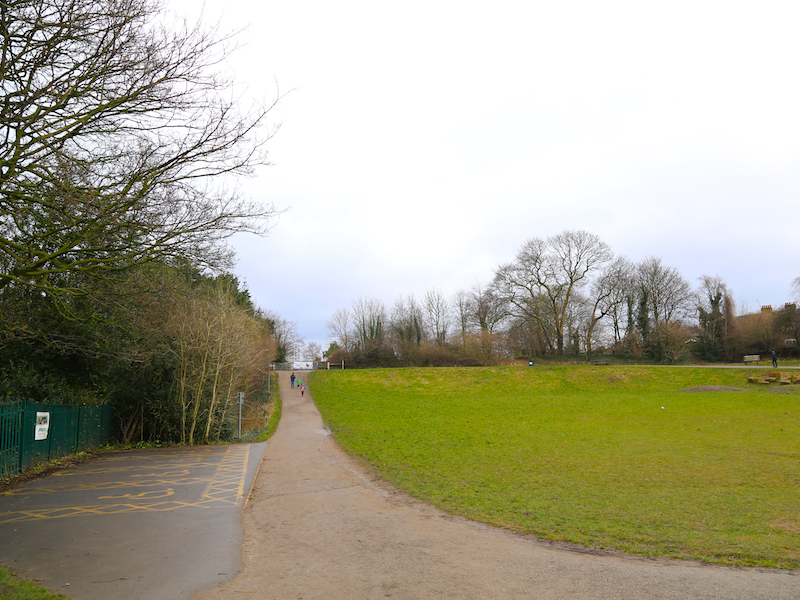 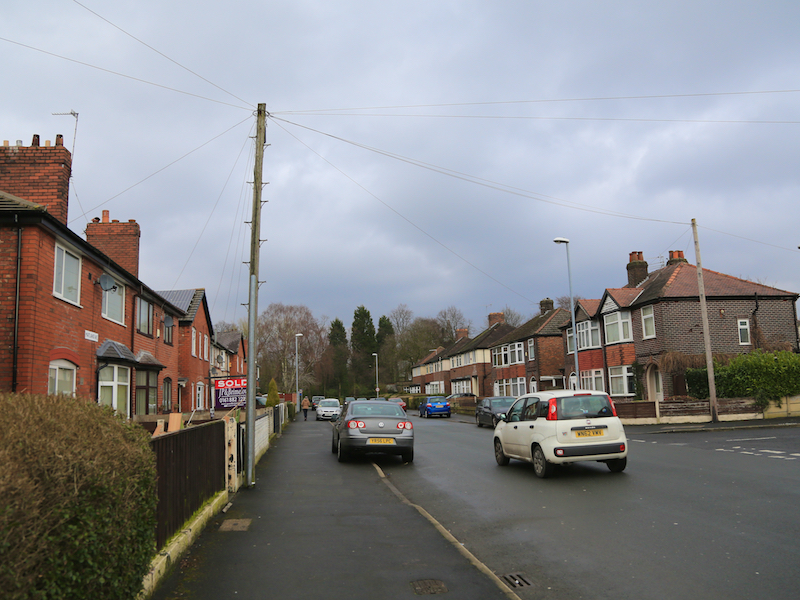 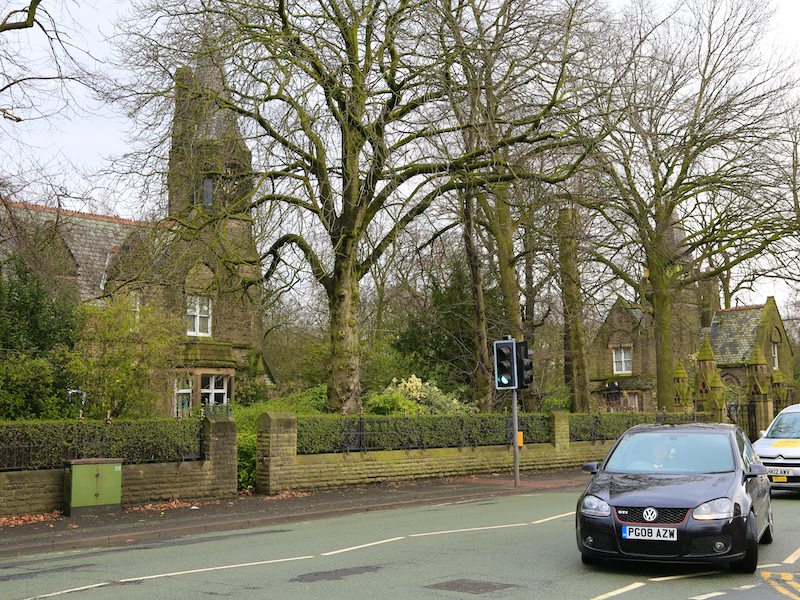 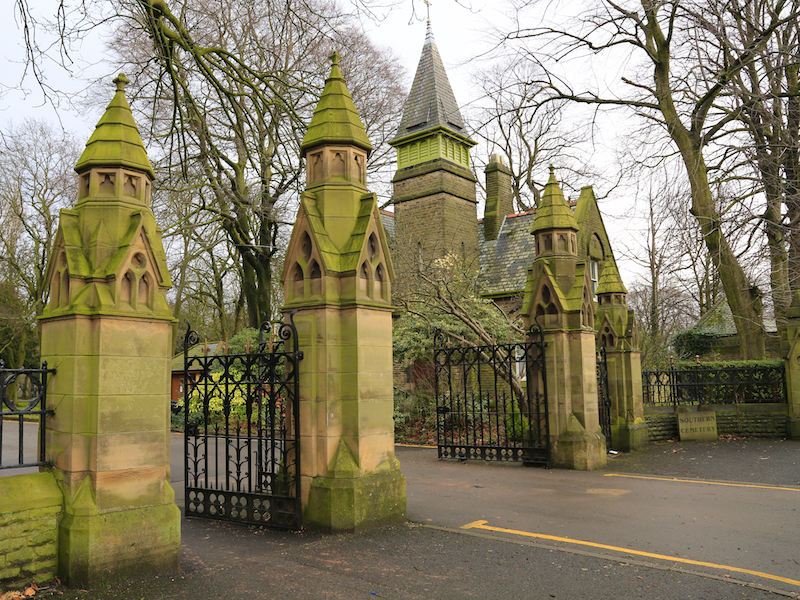 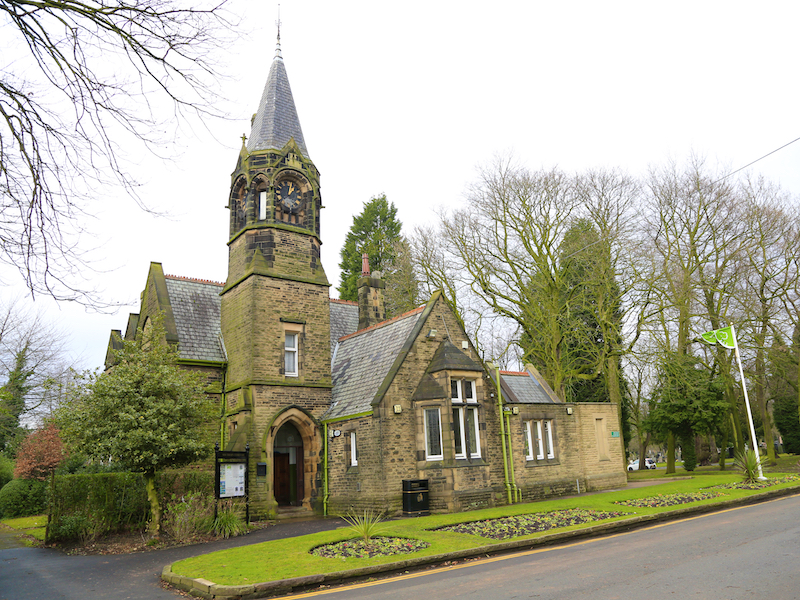 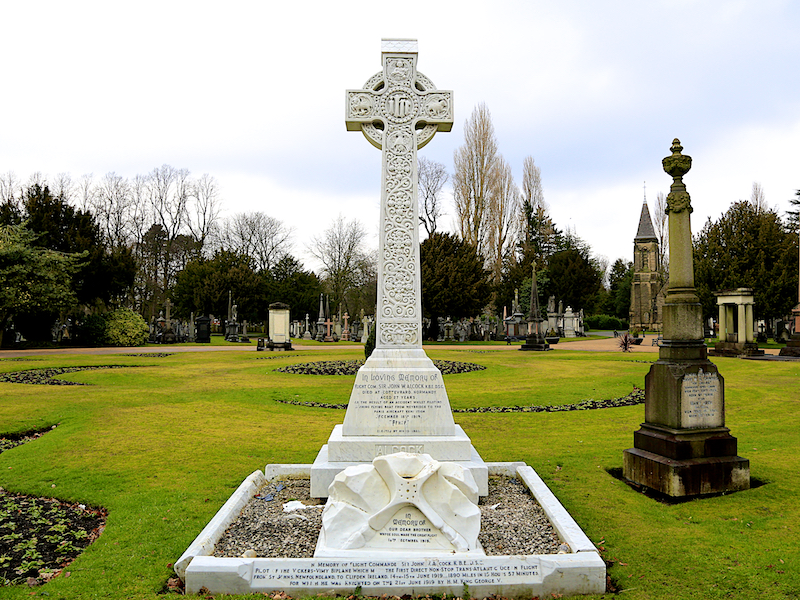 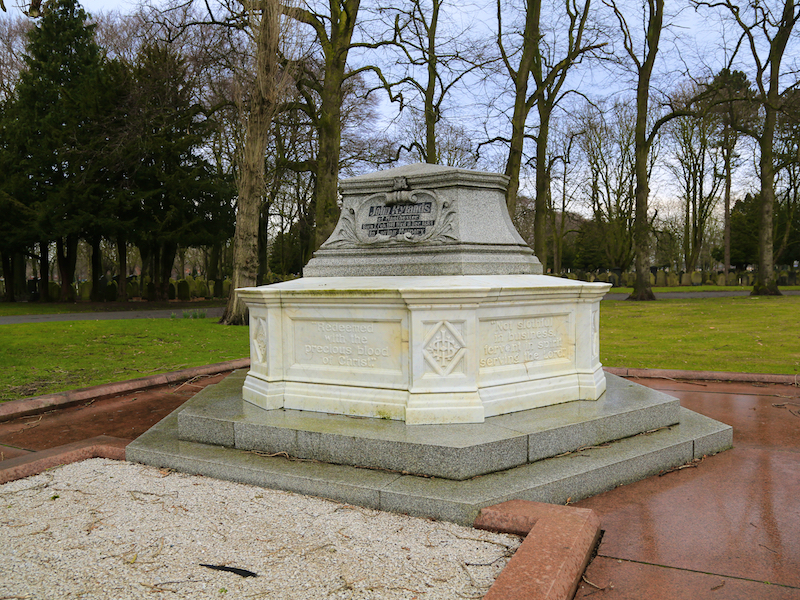 There are many good places to eat and drink on Chorlton Green and on Beech Road. 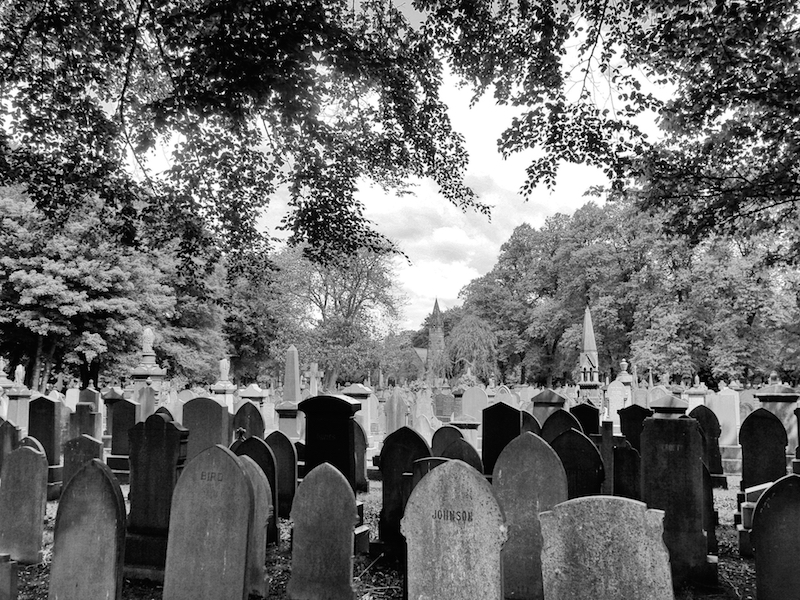 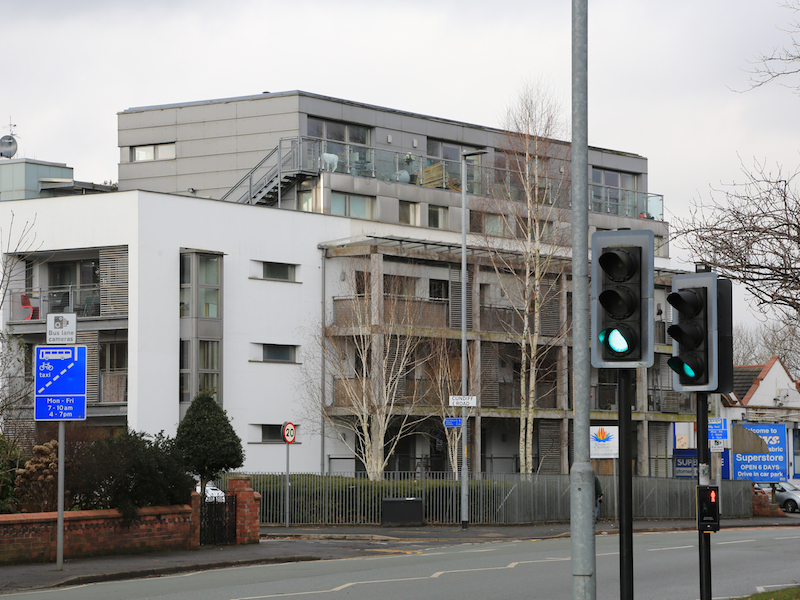 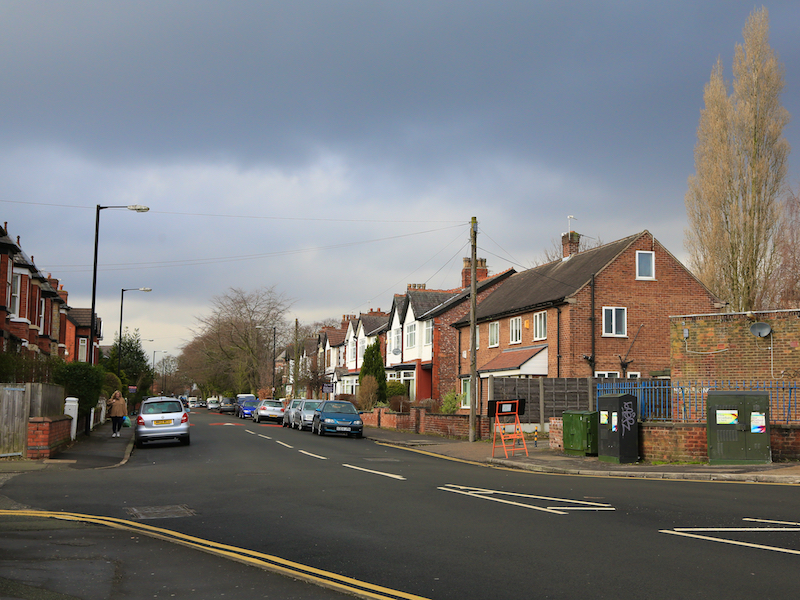 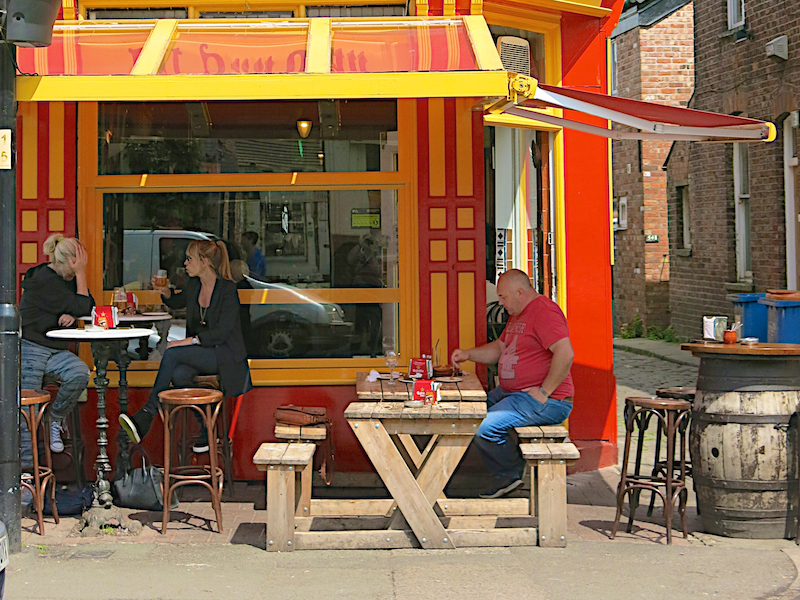